What exactly is going on with the Strategic Petroleum Reserve (SPR), and why does it matter? Biden confirmed he had already decided to have the Energy Department go ahead with sales of the last roughly 15 million of 180 million barrels from the U.S. Strategic Petroleum Reserve he had authorized for sale back in March. The sales will happen in December. He added he was also willing to authorize more sales from the reserve after that if needed, and he plans to replenish the reserver by initiating purchases when WTI crude prices are at or below $67 – $72/bbl.

The industry critics said drawing down reserves artificially lowers prices in the short term, dissuading investment in new oil production. Further, diesel demand is surging in the US while supplies remain at the lowest seasonal level ever, according to government data released Wednesday (19th). The diesel fuels inventories are at just 25 days.

The issue with this, say oil producers, is that oil may not hit that price anytime soon, as there have been serious limitations on drilling. American Fuels & Petrochemical Manufacturers CEO Chet Thompson says “The SPR was never meant to serve as a substitute for actual crude oil production, … and SPR releases are a short-term fix at best”

“We’re currently at a point where we have less federal leasing from this administration than we’ve had in any administration since World War II,” Sommers said. “We’re at record-level lows. At this point in the Obama administration, they’d done 60 leases in the offshore. So far, [Biden’s] only done six.”

What this means for investors/consumers

We have been invested in oil and oil production for most of the year, and in some cases more than a year. Those with continued exposure should see the associated energy companies stock prices remain at the high levels. There will be volatility to be sure, but this game isn’t over yet. Unfortunately, for those of us that use gasoline powered vehicles, travel by air, or buy any petroleum related products (plastics, etc.), we will need to get used to high prices until the oil drilling and pipelines resume. As said above by the experts – the release of the SPR is temporary relief, and we feel it akin to putting a band aid on a bullet wound.

A Presidentially-directed emergency release has occurred three times in the history of the SPR.

Here’s some information on how the SPR release works in practice: The maximum drawdown capability is 4.4 million barrels a day, according to the Energy Department’s website, and it takes 13 days for SPR oil to reach the open market after a presidential decision.

The below chart illustrates the SPR stockpiles from January, 1981 to October, 2022. We can clearly see we are down to 1984 levels currently, and after the release, we can expect the stockpiles to fall much further. Please reach out should you have additional questions or wish to discuss further. 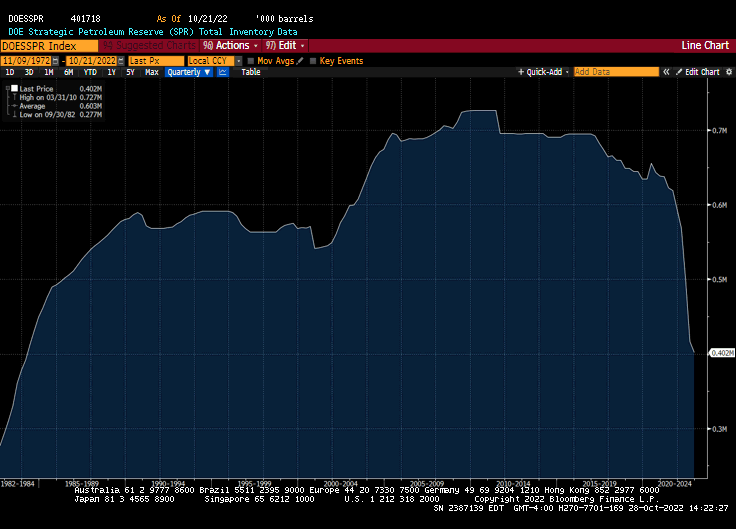 The information provided here is for general informational purposes only and should not be considered an individualized recommendation or personalized investment advice. The investment strategies mentioned here may not be suitable for everyone. Each investor needs to review an investment strategy for his or her own particular situation before making any investment decision.

All expressions of opinion are subject to change without notice in reaction to shifting market or economic conditions. Data contained herein from third party providers is obtained from what are considered reliable sources. However, its accuracy, completeness or reliability cannot be guaranteed. Supporting documentation for any claims or statistical information is available upon request.

Examples provided are for illustrative purposes only and not intended to be reflective of results you can expect to achieve.

Past performance is no guarantee of future results and the opinions presented cannot be viewed as an indicator of future performance.

Forecasts contained herein are for illustrative purposes only, may be based upon proprietary research and are developed through analysis of historical public data.

Stocks in Retirement: You Might Need More Than You Think

Stay informed as breaking news may impact your investments or financial plan.

Brian is a Partner at SharpePoint and specializes in the areas of Asset Management & Strategies, Financial Planning, and Portfolio Allocation Strategies.

Return to Resources
Stocks in Retirement: You Might Need More Than You Think